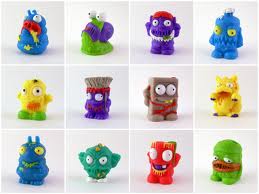 Hey guys, I just wanted to share some news with you because the ideas just came to me.

1. Mini trashies are going to get their own sub-series called "Teeny Trash!"

2. Can't find a trashie you've been looking for? Buy it off of a new section of the TP website! (Note: Each trashie does cost a bit more than usual, so this method should only be used for a select few trashies. Limited Editions are not included in this section.)

3. Trash Tops are just collectible tops of some of the trashies in the series. There are 20 to collect, and you can buy them in 5 packs or 2 packs. Use the included rip-cords to spin your top on any hard surface! (Note: Trash Tops do not fight. They are made of a different, lighter material that does not enable them to bash into each other without automatically falling over.)

So, yeah. I just thought that would be a little interesing for you guys. You can expect my last 2 updates this week.

Also, I finally have the logo up for Series Z. Expect more updates from that series soon.

Last, I added the logo for Series Y (which was originally known as Series Y Toxic Trash) and a "Who WAS that guy?" Have fun guessing!

And yes, mine is a butternut squash.

Either my drawing is really accurate or you're really great at guessing...

No, that's stupid. I hate it when people use names like that.

His name doesn't even have "butternut" in it.

I was talking about my guess!

No. Squashed Squash is too repetitive.

I'm not telling you his name.

What do you think?