Note: This is an unnamed series of my trashies! Please do not edit or add any pictures!

This is the third of my series. To see the previous one, click here.

The trashies now come in dark green wheelie bins. The new logo uses it's codename, and shows a sewer pipe leaking ooze and junk. Bin Critters return, replacing the Bin-Sects. Bin Monsters are still absent though, due to the new UFT. The ultra-rare trashies are called "Junk Jokes." They are slimy and oozey, each trashie with a slightly different texture. This series actually has two ultra-rare groups, the other being the spiny "Desert Trash." They aren't really pokey, the spikes are just rubbery, like Germit's. The special-editions are "stretchy trashies" (self-explanatory). Mini trashies make a return, and are listed below in bold parantheses. The other special trashies (like the minis) are GID trashies. Scrap Racers make a return also, with 6 new exclusive sets. You can read about them here. Some of the playsets are based off of the new amusement park area in Trash Town. The other sets focus more on buildings and vehicles. The playsets now come with exclusive trading cards of the trashies inside. None of the playsets are remote-control. The limited editions are once again glow-in-the-dark, and are Magic Trash. There are new Trash Pack candies, which you can read about here.

There is once again a new collector's case, this time a vault. Only this time, a second collector's case was also released, the Trash Chest. Both of these cases can be locked. The Vile Vault can be set to a combination, and the Trash Chest comes with a lock and a key. The games booklet in the 12 and 20 packs has new games. A whole new collection of trading cards were released alongside the series. The new trading card tins are: Tuna Chunks, Gum Packet, and Jelly Beans. The codename for this series is "Series $." It is used on the logo. There were two alternate logos when the series was first revealed.

Food Of The World: 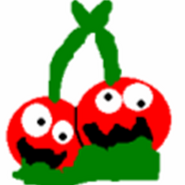 Scary Cherries, a mini trashie.
Add a photo to this gallery

Retrieved from "https://thetrashpackfans.fandom.com/wiki/Unnamed_Series_lll?oldid=10353"
Community content is available under CC-BY-SA unless otherwise noted.